Women as the drivers of success

A new report says women in key decision-making roles will help businesses get through COVID-19, but the gender balance is still a long way off

The coronavirus pandemic has hit businesses hard. As owners and leaders try to navigate the difficult economic environ-ment, research suggests it could be time to look at the diversity of leadership teams.

According to the Gender Equity Insights 2020: Delivering on Business Outcomes report, having a higher number of women on boards and in senior leadership positions drives better company performance, greater productivity and higher profitability.

Released by the Bankwest Curtin Economics Centre (BCEC) and the Workplace Gender Equality Agency (WGEA), the research found that a 10 percentage point increase in the share of female top-tier managers led to a 6.6% increase in the market value of Australian ASX-listed companies. This was worth the equivalent of $104.7m.

The report’s co-author and BCEC principal research fellow, associate professor Rebecca Cassells, said leadership had never been so important, especially now that the world was dealing with the fallout and economic recovery from the COVID-19 pandemic.

“When businesses are looking to a post COVID-19 world, our research shows that having a female CEO has the potential to help companies navigate through the crisis,” said Cassells.

Despite the importance of having female leaders, women only make up 17.1% of CEOs. Women are also least likely to chair a board, with only 14.1% of women being board chairs.

WGEA director Libby Lyons hailed the research as a significant contribution to the international business case for gender equality.

“Workplace gender equality is not just about fairness; it also has a compelling commercial imperative,” she said.

“This research provides hard evidence that more women in top-tier management levels will deliver improved profitability for busi-ness. Now more than ever, achieving work-place gender equality is an absolute necessity for every organisation in Australia.”

“The culture of any organisation starts from the top and cascades through every layer. Having diverse leaders sets a clear and important example” Anja Pannek, PLAN Australia

Setting a ‘tone from the top’

Agreeing that the research demonstrates the benefits of diversity at the leadership level, PLAN Australia CEO Anja Pannek says that when women are more equally represented in the workforce, especially in management, improved outcomes and enhanced business performance could be directly attributed to diversity of thought and decision-making.

“A team is only as good as its leader,” she says. “The culture of any organisation starts from the top and cascades through every layer. Having diverse leaders sets a clear and impor-tant example – the ‘tone from the top’; it openly demonstrates that the company is fair and open-minded and values differences.”

As Australia faces a second wave of COVID-19 with further hits to the economy, Pannek says we are “operating in uncharted waters”. Leaders need to make decisions to address challenges as they come and prepare  for those ahead – and a diverse team means greater diversity of thought and perspectives.

“Uncertainty around so many elements of how businesses should operate and thrive and what the near-term future looks like has required all leaders to think outside the box,” Pannek says. “Unlike previous financial crises many of us have worked in, we are having to deal with not only the economic impact but also the health and social impacts of COVID-19. These include remote working, home schooling and stress.

“Females are a major customer segment yet remain severely under-represented in key decision-making positions, and that is a major risk” Jane Counsel, thrive4women

“Empathy, resilience, pragmatism, benev-olence, mutual aid and humility are often associated with female leaders, and these characteristics empower any leader to perform well in a crisis, and in particular in this one.” 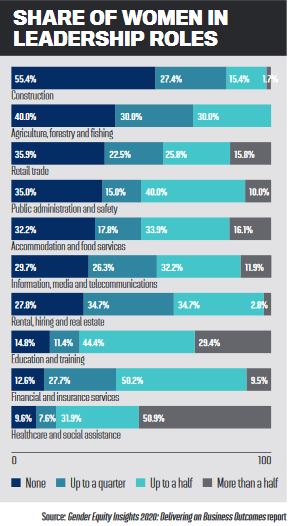 Supporting the female customer base

The Gender Equity Insights report shows that construction is the industry least likely to have women as key management personnel or as board members and chairs. Over 55% of these companies have zero female representation in management, compared to 12% of those in financial and insurance services. Only 9% of financial and insurance services organisations have more women than men on leadership teams. Across all industries, 27.5% of companies have no females in key management roles, and just over 18% have leadership teams in which women outnumber men.

Jane Counsel, diversity and inclusion consultant and co-founder of thrive4women, says that while financial services exhibits many of the same traits as other male-dominated industries, it has made much more progress in addressing the barriers to female participation.

“The very fact that we have seen a number of women appointed to very senior roles and in fact had a female, Gail Kelly, running Westpac, one of our top four banks, demonstrates that there has been significant investment in the development and progression of women,” Counsel says. She adds that the royal commis-sion and subsequent challenges have been a distraction, but “it is time to put gender diver-sity very firmly back on the agenda”.

“The reality is, females are a major customer segment yet remain severely under-represented in key decision-making positions, and that is a major risk to the ongoing growth and success of this industry,” Counsel says.

“It needs to be embraced by everyone, but especially male leaders who have the ability to invest in initiatives and solutions that will drive change and who, through their behav-iours and priorities, can influence and shape an overall industry culture that welcomes and embraces all differences, be it gender, age, culture, disability, sexual orientation, etc.”