Finding the positive in spite of growing negative coverage

Despite a cooling market due to Ontario’s housing plan, Toronto is still expected to close out the year with impressive price gains

Despite a cooling market due to Ontario’s housing plan, Toronto is still expected to close out the year with impressive price gains.

That’s according to Royal LePage, which is forecasting the country’s largest market will close out the year with an average price of $862,264 – an 18.5% year-over-year increase.

This, despite GTA home sales plunging 37.3% year-over-year in June.

“Activity in the Greater Toronto Area began to stabilize in the second quarter as more listings came onto the market as a result of a late start to the spring,” Dianne Usher, senior vice president, Johnston and Daniel, a division of Royal LePage, said. “While we didn’t see a direct impact to annualized home price appreciation in the second quarter as a result of the new policies, they have led to a psychological pause, with prospective homeowners adopting a ‘wait and see’ approach, sitting on the sidelines in the hopes of a material drop in property values across the region. However, we believe that the hit to consumer confidence will only create a temporary lull in sales activity and anticipate that the region’s seller's market will continue over the coming months.”

Pricey Toronto real estate is forcing buyers to look outside the downtown core, which includes Scarborough.

“Prices in Scarborough continued to climb in the second quarter due to an influx in millennials seeking affordable options, relative to many other regions in the GTA,” Royal LePage said in its report. “Retaining its position as one of the most affordable and accessible areas within the GTA, the aggregate price of a home in the region rose 21.1 per cent year-over-year to $674,194, with a minimal slowdown in appreciation anticipated in the coming months.”

And the sales creep is also occurring to the west of the city.

“Brampton witnessed significant appreciation in the second quarter of 2017, with the region’s aggregate home price rising 23.9 per cent year-over-year to $682,161,” Royal LePage said. “Due to the market’s lower price point and attractive property sizes relative to other areas across the GTA, prospective buyers from the downtown core, as well as Richmond Hill and Vaughan have begun to enter the market, causing home values to inch upwards. However, activity within the region has begun to slow in recent weeks, as buyers are increasingly willing to wait and see whether pricing will continue to soften in the near future.” 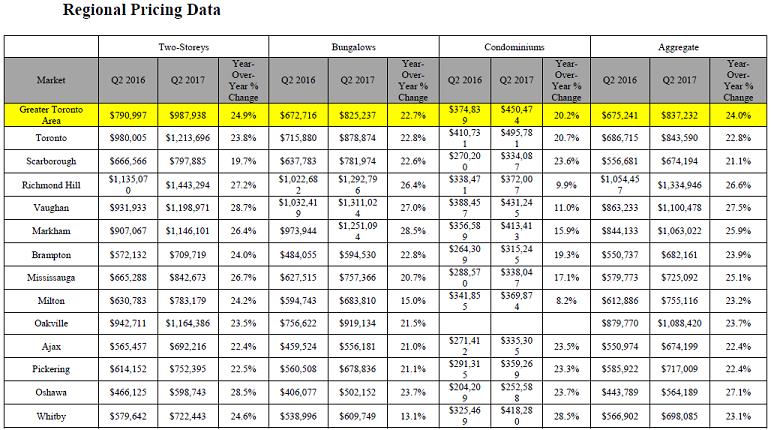 MCAP doubles down on broker support with Partnership Insights cards

Mortgage executive on a “once-in-a-lifetime” opportunity