Forbearances may have reached a floor – MBA

The share of mortgage loans in forbearance has remained steady over the past few months – a sign that “forbearances have reached a floor on further improvements,” according to the Mortgage Bankers Association

MBA’s latest loan monitoring survey revealed that the total number of loans in forbearance remained unchanged at 0.70% as of Dec. 31, 2022. Based on the survey’s estimate, 350,000 homeowners are currently in forbearance plans.

“For three consecutive months, the forbearance rate has remained flat — an indicator that we may have reached a floor on further improvements,” said Marina Walsh, vice president of industry analysis at MBA. “New forbearance requests and re-entries continue to trickle in at about the same pace as forbearance exits. The overall performance of servicing portfolios was also flat compared to the previous month, but there was some deterioration in the performance of Ginnie Mae loans.”

Of the total loans in forbearance, 37.9% are in the initial forbearance plan stage, 49.3% are in a forbearance extension, and the remaining 12.8% are re-entries, including those with extensions. Total loans serviced that were current (not delinquent or in foreclosure) as a percentage of servicing portfolio volume hovered at 95.69% on a non-seasonally adjusted basis. 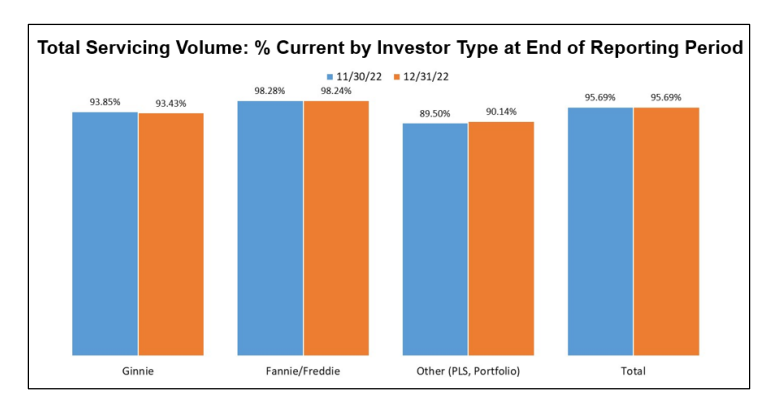 “Forbearance remains an option for struggling homeowners, and its usage may continue, especially if unemployment increases, as expected,” Walsh said. “MBA is forecasting for the unemployment rate to reach 5.2% in the second half of 2023, up from its current level of 3.5%.”

The MBA’s forecast for an increase in the unemployment rate in 2023 highlights the need for continued support for homeowners, such as forbearance plans, to ensure that they are able to keep their homes.

Want to make your inbox flourish with mortgage-focused news content? Get exclusive interviews, breaking news, industry events in your inbox, and always be the first to know by subscribing to our FREE daily newsletter.

Our daily newsletter is FREE and keeps you up to date with the world of mortgage. Please complete the form below and click on SIGN UP to receive daily e-newsletters from Mortgage Professional.
Fetching comments...

How one CRE firm has weathered the economic storm